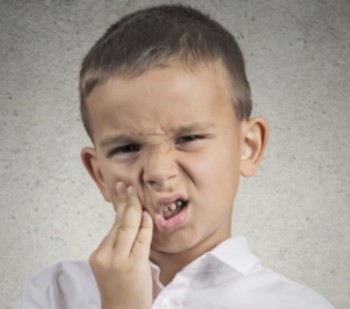 Every child is at risk of tooth decay. The enamel (hard outer layer of teeth) is much thinner and softer on baby teeth, making them at greater risk of decay.  Sometimes called Baby Bottle Tooth Decay, early childhood cavities is a serious disease that can destroy your child's teeth.  The good news is that tooth decay is largely preventable.

Bacteria in the mouth feed on sugars from foods and drinks. These bacteria produce acid which damages the enamel.  Saliva repairs this damage, but if over time there is more damage than repair, it leaves a cavity or ‘hole’ in the tooth.

The tooth decay process is also called ‘caries’.  Early childhood caries is severe tooth decay that affects the baby teeth of young children.  In the later stages, teeth have brown or black areas.  The upper four front baby teeth are most commonly affected.

Other names used to refer to this condition include ‘nursing bottle caries’, ‘infant feeding caries’ and ‘baby bottle decay’.  These names are used because the evidence suggests that early childhood caries can occur if babies are settled to sleep with a bottle of milk or formula (or other sweet drinks).  Milk can pool in the mouth and the lactose sugar in milk feeds the bacteria that cause decay as the baby sleeps.  Saliva flow is low during sleep, and so does not protect against the damage.

Early childhood caries might also occur if toddlers constantly sip on sweet drinks, such as fruit juices, cordials or soft drinks, during the day. Avoid sugary foods and drinks, especially between meals.

Tips for Preventing Cavities in Children